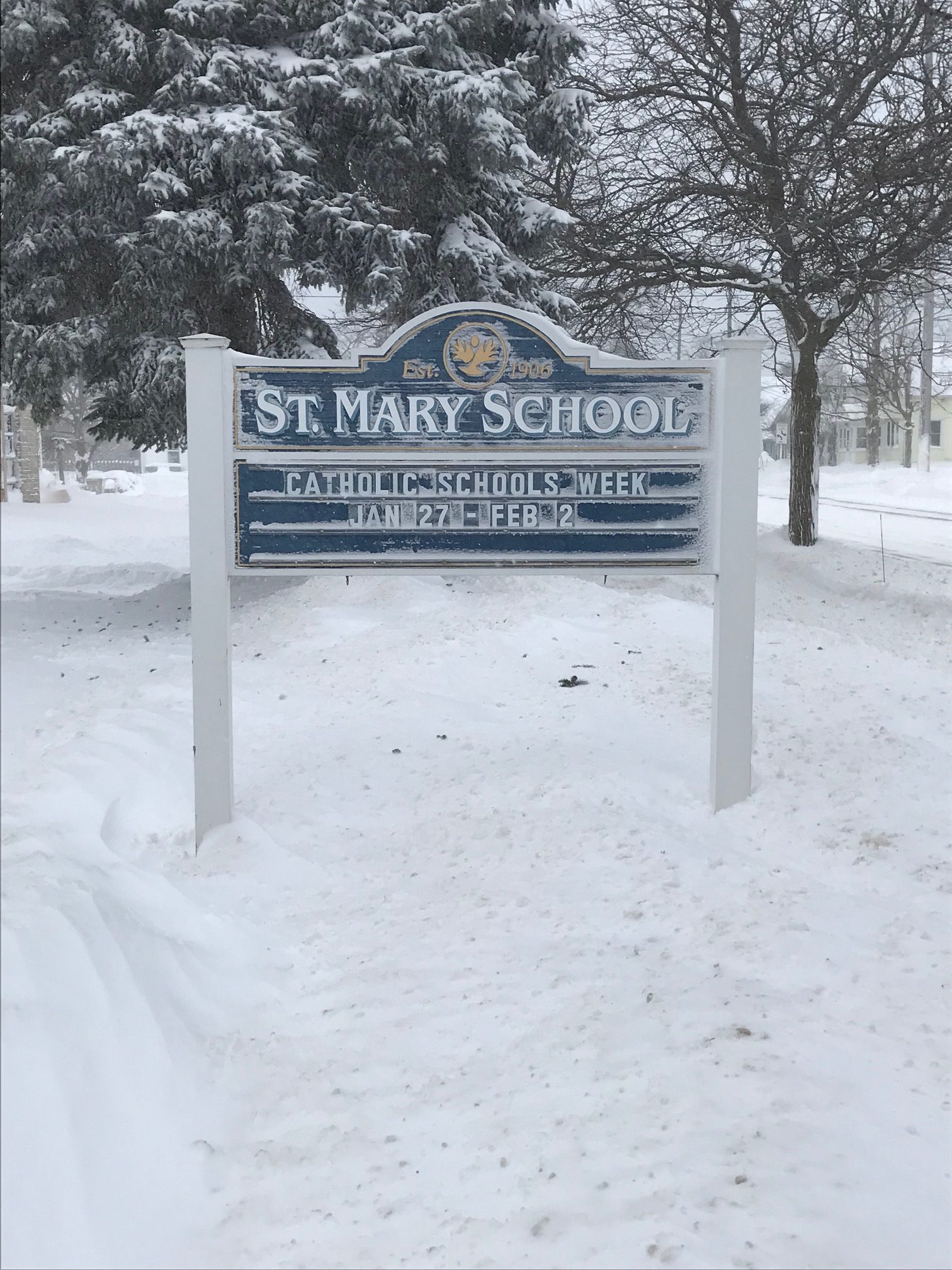 The first Sister Superior of St. Mary’s School was Sister Mary Clare of the Dominican order. She came to Charlevoix from Grand Rapids with two other Dominicans who were to serve as the school’s first teaching staff, Sisters Mary Carola and Mary Innocence.

Within a short time enrollment grew enough to justify the addition of high school classes. St. Mary’s had high school graduation classes from 1912 to 1918. After 1918, the high school level was closed and the school operated as an elementary school with eight grades. In 1924 it was completely renovated and redecorated.

In 1953, Father E. Francis Denary arrived as pastor of St. Mary’s and immediately initiated a campaign to raise $75,000 to build a new school. The floor plan featured four classrooms, a parish meeting hall with complete kitchen, offices, lockers, restrooms, a utility room and a library. June 5, 1955 was the last day classes were held in the old school. Everything movable was stored and the old building was razed to make way for new construction. Ground was broken that year for the new school with Sister Athenasius, O.P. presiding as principal. The school could not be finished in time for classes in the fall so when classes began in September 1955, the first graders went to the public school and the 82 other students reported for classes at the old Lincoln School, now the Leslie T. Shapton American Legion Post.

On August 16, 1956 the new facility was dedicated. “The new St. Mary’s School is a symbol of a well-built personality,” stated Bishop Babcock in his dedication address. “You should think of it as a stepping stone to better things and as an example of building well and solidly for life and for eternity.” The school opened September 11, 1956 with 112 students in 8 grades with Sister Mary Eileen as principal. Peak enrollment at St. Mary’s was reached in 1963 when there were 180 students in grades 1-8. In 1965, Sister Martin Porres became principal and guided the school through the changes introduced in the post-Vatican II years. A school board was formed and held its first meeting in 1968. When diocesan guidelines recommended not more than 35 students per classroom, the decision was made in 1967 to transfer the 7th and 8th grades to the Charlevoix Middle School.

In 1987 the sixth grade was transferred to the middle school and a kindergarten class was added.

The first lay principal was Janet Troppman who served as principal from 1999-2006. During those years the school again had more building additions and housed Pre-K through 6″ grade.

In 2012 the 7th grade was brought back and in 2017 an 8th grade was added on and our students in grades 6-8 began switching classes. In the 2019-2020 school year another section of Pre K was added because there were too many students for one class. Currently, we have 91 students in Pre K through 8th grades.

The St. Mary School Community empowers students to grow spiritually, academically, creatively, and physically so that they may experience, understand and live their responsibilities to God, family, community, and self.